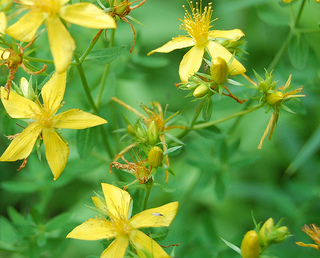 Hypericum perforatum, or St. John’s Wort, is so named because it was traditionally harvested on St. John’s day (June 24th). It is perhaps one of the most commonly recognized herbs in the Western world. As with many herbs, this invasive weed has a long history of medicinal use, being originally used to ward off evil spirits.

St. John’s Wort: Effects
The most well-known effect of St. John’s Wort is for mild & moderate depression. The research backs up this understanding, with results showing similar effectiveness to clinically-prescribed antidepressants. In order for the herb to work, however, strict adherence to taking the herb must be followed, which we’ll talk about later.

Perhaps less well known is the herb’s effect on treating anxiety. The reasearch is less supportive of this use, but most studies do not differentiate between different types of anxiety yet, so there are still some areas that need more investigation. Traditional herbalism states that St. John’s Wort is really only effective for anxiety that’s accompanied by some kind of inner turmoil, tension, or frustration. Anxiety that’s based on fear or accompanied by panic attacks responds less well.

Also not as well known is that St. John’s Wort is traditionally used to treat viral infections and inflammations in the body. The herb has an specific affinity for treating UTIs, and can be applied topically as a wash for inflamed and non-healing wounds.

Side Effects & Using the Herb
With all its uses, St. John’s Wort is not without side effects. There are compounds in the herb that can make your skin more sensitive to light, and dizziness and confusion after taking the herb are also possible. However, the most noticeable reaction is that the herb boosts liver function, which can result in changing the metabolism of other drugs you might be taking. So, if you are on different medications it’s possible that their effectiveness will be reduced.

Traditionally, St. John’s Wort has to be taken daily for weeks to months in order for a person to really see a difference. Because people need to be on the herb for quite a while, and because of the effects the herb has on other medications, people who are considering taking St. John’s Wort should consult with an herbalist to determine the proper dose to take and for how long to take it. Nevertheless, the herb remains a powerful addition to your list of options for treating frustration-related depression & anxiety.