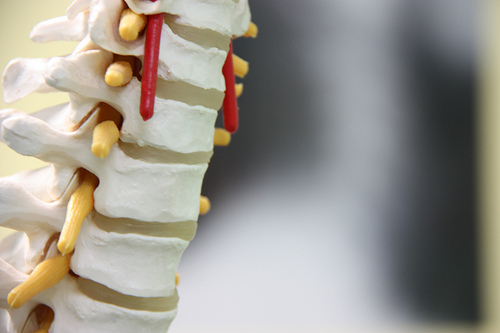 A herniated disc occurs when the disc cushioning the vertebrae of the spine ruptures and allows the disc matter inside to leak out. Herniated discs are often preceded by bulging or slipped (also known as prolapsed) discs, where the disc shell moves out of its typical place due to forces acting on the spine, or as a result of aging. If the disc compresses one of the nerves coming out from the spinal cord, it is common to have radiating pain, difficulty moving, and occasional numbness. While bulging discs are considered to be a part of aging and don’t always cause problems, herniated or slipped discs have a much greater degree of problems that go along with them.

For herniated discs in particular, surgery is the conventional option. But many people want to avoid surgery, and if you’re one of them, you should give acupuncture or herbal medicine a try. The goal of treatment is to stop pain, encourage the disc to seal, and to flush out the disc matter that has escaped from the inside of the disc. Using acupuncture to do these things can take a while, often months. Even so, pain relief will increase steadily and the end result is a back that is as mobile before the herniation, without leaving surgical scar tissue or dealing with the side effects of pain medications.

One particular technique that acupuncturists use for herniated discs is moxibustion. This technique is often used along with acupuncture. Moxibustion helps to encourage lymphatic flow in the body so the disc matter can be reabsorbed more quickly, and it also helps with pain relief. Certain types of moxibustion have been shown to offer superior care for pain relief.

Chinese herbal medicine can also play a role for disc problems. If a disc is starting to slip (and may be causing pain by pinching off a nerve), certain herbal formulas can specifically help strengthen the back to encourage the disc to return to its proper place.

If you’re dealing with back pain from disc problems, schedule your consultation today to get relief!